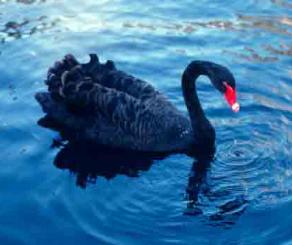 Black Swan Adult
The Black Swan is a large waterbird, a species of swan, which breeds mainly in the southeast and southwest regions of Australia.

The species was hunted to extinction in New Zealand, but later reintroduced. Within Australia they are nomadic, with erratic migration patterns dependent upon climatic conditions. Black Swans are large birds with mostly black plumage and red bills. They are monogamous breeders that share incubation duties and cygnet rearing between the sexes.

are primarily black-feathered birds, with white flight feathers. The bill is bright red, with a pale bar and tip; and legs and feet are greyish-black. Cobs (males) are slightly larger than pens (females), with a longer and straighter bill. Cygnets (immature birds) are a greyish-brown with pale-edged feathers. 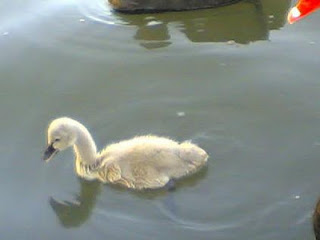 The Black Swan is almost exclusively herbivorous, and while there is some regional and seasonal variation, the diet is generally dominated by aquatic and marshland plants. In New South Wales the leaf of reedmace (genus Typha) is the most important food of birds in wetlands, followed by submerged algae and aquatic plants like Vallisneria. In Queensland aquatic plants like Potamogeton and stoneworts and algae are the dominant foods. The exact composition varies with water level, in flood situations where normal foods are out of reach Black Swans will feed on pasture plants on shore.
Tweet