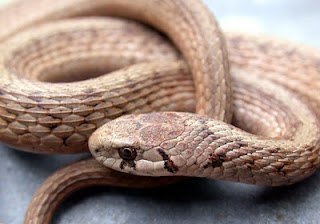 Adult Eastern Brown Snakes
Adult Eastern Brown Snakes are highly variable in color. Whilst usually a uniform shade of brown, they can have various patterns including speckles and bands, and range from a very pale fawn colour through to black, including orange, silver, yellow and grey. Juveniles can be banded and have a black head, with a lighter band behind, a black nape, and numerous red-brown spots on the belly.


This species has an average length of 1.5–1.8 m and it is rarely larger than 2 m. Large Eastern Brown Snakes are often confused with "King Brown" snakes (Pseudechis australis), whose habitat they share in many areas.

The Eastern Brown Snake is found all the way along the East coast of Australia, from the tip of Cape York, along the coasts and inland ranges of Queensland, New South Wales, Victoria and South Australia. They are also found in arid areas of the Northern Territory, the far east of the Kimberley in Western Australia and discontinuously in parts of New Guinea, specifically northern Milne Bay Province and Central Province in Papua New Guinea, and the Merauke region of Papua Province, in the Indonesian part of New Guinea. Due to their mainly rodent diet, they can often be found near houses and farms. 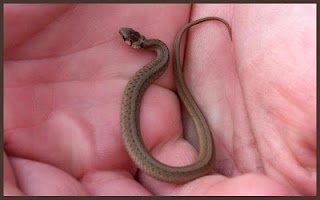 Baby Eastern Brown Snakes
It occupies a varied range of habitats from wet to dry sclerophyll forests (Eucalypt forests) and heaths of coastal ranges, through to savannah woodlands, inner grasslands and arid scrublands. It is not found in rainforests or other wet areas.

The Eastern Brown Snake is the second most venomous land snake in the world based on LD50 after the Inland Taipan. The venom consists mostly of neurotoxins and blood coagulants. The Eastern Brown snakes kept at venom supplies laboratories yield an average of 4.7 mg per milking. As with most venomous snakes, the volume of venom produced, is largely dependent on the size of the snake. Worrell (1963), reported a milking of 41.4 mg from a relatively large (2.1 m) specimen. This record is atypical, as on average, the Eastern Brown snake yield a low volume of venom which is regarded as not more than 10 mg. Without medical treatment, death is highly likely if bitten by this species.
Tweet