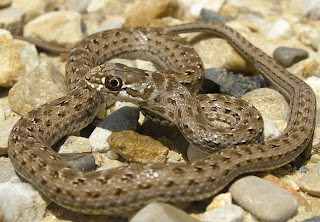 Malpolon monspessulanus
Although it is venomous, only a few cases of envenomation of humans are known, one of which occurred when a finger was inserted into the snake's mouth. The Montpellier snake is not a dangerous snake for humans. The rear fangs reduce the possibility of venom injection, and the venom is of low toxicity. Venom injections are possible in bites of big individuals.

The venom is not very dangerous; symptomatic treatment suffices to treat an envenomation. The unthreatening nature of the snake, along with its relatively mild persecution by man, has made it one of the more common species throughout its range, even in areas occupied by humans.

Genetic evidence suggests that the species originated in the Maghreb, migrating into southwestern Europe between 83,000 and 168,000 years ago and into southeastern Europe and western Asia at an earlier time. It is most closely related to the North African and Arabian species Malpolon moilensis and to a fossil species from the Pliocene of Spain, Malpolon mlynarskii, with which it forms the genus Malpolon. Malpolon has a good fossil record, dating back to the Pliocene in both southwestern Europe and northern Africa, but many of the fossils are isolated vertebrae, which are difficult to assign to species.
Tweet