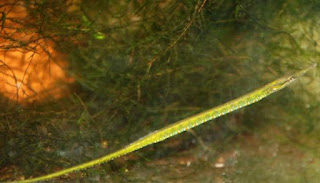 Aquariums are used to preserve fish is aquarium measuring at least 90 cm or capacity of 132-170 liters. At the aquarium there should be sand and should be facing the direction that gets morning sun. Crop water use is a water plant that can tolerate slightly brackish water conditions. Aeration conditions in the aquarium should be good. This fish can be kept with fish that character is quiet and does not compete in terms of food, eg other pipefish, catfish synodontis, molly, or next to freshwater fish. The condition of water needed; pH 7-8 water temperature 24-28 ° C.

Because these fish also live in brackish then adding salt into the aquarium is recommended. Add 0.5% of the total volume of salt water aquarium. Food that can be given is a small live food such as crustaceans, water fleas, and blood worms. How to eat fish also arguably unique, prey will be sucked into the mouth by a tubular vacuum created by the closure of the mouth and gills simultaneously. African Freshwater Pipefish are fish that are vulnerable to changes in water conditions and diseases. Therefore, the condition of the water should be in good condition and must be replaced periodically. Also, the fish is better maintained in aquaria species despite the fact be kept in community aquarium.
Tweet