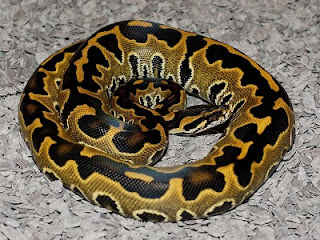 Python is a species of venomous snakes are not large. The biggest size is said to exceed 10 meters. Longer than anakonda (Eunectes), the largest and longest snake in South America. Other names are python, snake rice, rice-n-etem (Simeulue); snake petola (Ambon); and in English Reticulated python or often abbreviated retics. 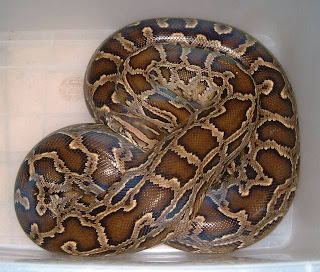 Identification python
Reticulatus is easily recognizable because generally big. Family sanca (Pythonidae) are relatively easily distinguished from other snakes by looking at the scales dorsalnya more than 45 rows, and scales ventralnya narrower than the width of the underside of the body. In western Indonesia, there are five species: three species of short stature that is obese group peraca snake (Python curtus group: P. curtus, P. and P. brongersmai breitensteini) in Sumatra, Borneo and Peninsular Malaya.
Two other species are relatively long-bodied, solid muscular: P. molurus (sanca are guy) and P. reticulatus. Both are spread from Asia to the Greater Sunda, including Java. P. molurus has a different developmental pattern from reticulatus, especially with the large V pattern of dark on the top of his head. Reticulatus has a pattern of large circles shaped nets (reticula, nets), composed of the colors black, brown, yellow and white along the dorsal side of his body. A thin black line running on top of head from snout to nape, resembling the center line that divides the two right-left head symmetrically. And each one other black lines are thicker on each side of the head, through the eyes back. 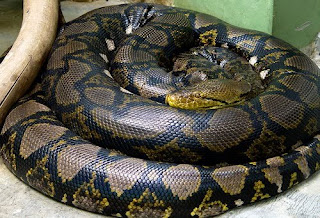 The scales dorsal (back) are arranged in rows 70-80; scales ventral (stomach) as much as 297-332 units, from bottom neck to anus; lateral subkaudal (bottom side heads) 75-102 pairs. Rostral shield (scales on the tip of the snout) and four shields supralabial (the scales on the upper lip) has a hollow hole leading penghidu heat (heat sensor pits) that in (Tweedie 1983).
Tweet

0 Response to "Species And Kinds Python"